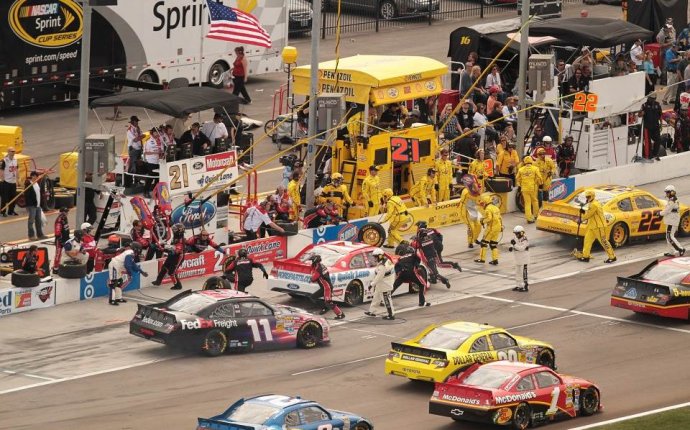 Everyone pretty much agrees football, baseball, soccer, basketball and hockey are “sports” and that the people who play those sports are “athletes, ” but there has remained a stubborn segment of fandom over the years which has refused to accept car racing as a “sport” — or by extension, drivers as “athletes.”

You may recall that former pro quarterback Donovan McNabb famously said six-time NASCAR Sprint Cup champion Jimmie Johnson is “not an athlete” in 2013, triggering another round of spirited debate in what Jeff Gordon described at the time as a “20-plus-year debate.”

“No, he sits in a car and drives, ” McNabb said on FOX Sports Live (clip below).

Well, after decades of debate — by Gordon’s count, anyway — science is finally helping to settle it, once and for all.

Dr. Lara Carlson of the University of New England in Biddeford, herself a former elite amateur hammer thrower, has spent the last five years researching what race car drivers’ bodies go through while on the track.

“I think most people, when they hear what [race car drivers] do, they think, ‘Really, all they do is turn left?’ A lot of my talks are titled ‘More than just turning left, '” Carlson said. “They’re wrestling that car around the track, and you can’t for an instant lose your focus. There are 40-plus cars on the track at very high speeds, and things happen very quickly.”

Carlson planted dermal pads on the extremities of stock car drivers at Maine’s Oxford Plains Speedway to track their surface temperatures during races, and had the drivers swallow ingestible capsules to monitor their core temperatures, among other research measures.

“The goal was to quantify the thermal regulatory and physiological responses associated with driving a stock car, ” Carlson explained.

Carlson found that stock car drivers — wearing heavy, flame-retardant suits that restrict sweat evaporation while confined to a small cab on a hot track — have core temperatures of about 38.6 degrees Celsius, or 101.48 degrees Fahrenheit.

(Anyone who’s ever had a fever knows that a person’s normal body temperature is around 98 degrees Fahrenheit — 101.48 would typically justify a trip to the doctor’s office, or at the very least a day or two off from work.)

So they’re dangerously hot. But does that make them athletes, per se?

It does if you continue following the physical responses to that heat and combine it with the other stresses they’re enduring.

“There’s a lot going on, ” Carlson said. “I think people know that it’s hot, but we went out there to show how stressful that heat and cardiovascular strain can be when it’s all going on at the same time.”

Previous studies have shown that once a military pilot reaches a core temperature of 38.5 degrees Celsius (101.3 degrees Fahrenheit) his or her “gray out” threshold — for how much G force he or she can withstand before starting to pass out — drops by about one G.

G force is basically the amount of additional gravitational pressure something experiences, in these cases because of extreme centripetal force. So experiencing two Gs would be like feeling your body weighed twice as much as it actually does, for instance.

“Typically, the vertical and lateral G loads [for stock car drivers] are between three and five Gs in those [banked] turns, ” Carlson said. “In a space shuttle launch, for comparison, I think they pull three Gs for several seconds. These [stock car drivers] are doing that for three or four hours.”

NASCAR drivers and cars have evolved over the decades to regularly reach speeds of nearly 200 miles per hour, while Formula One racers regularly top that number.

Carlson herself got a taste of what stock car drivers experience when, for a wedding anniversary, her husband signed her up for a spin around the track at New Hampshire Motor Speedway, where two NASCAR races take place each year.

“It felt like my brain was trying to squeeze through my right ear, ” she recalled. “It wasn’t a pleasant feeling.”

So now we’ve got dangerous body heat, dangerous G loads and an unpleasant feeling as though your brain is going to squirt out your ear. Athlete yet?

Carlson said if those conditions don’t close the case already, her research determined that in order to withstand those conditions in modern racing, drivers must put themselves through intense physical training, much like what their counterparts in more widely accepted sports do.

If “running and jumping” is the ultimate criteria used by some to decide whether a person is an “athlete” or not, she suggested, these drivers pass the test by virtue of what they must do before they ever climb through that driver’s side window.

Carlson’s research found that the conditions described above push drivers’ heart rates down to about 80 percent of their normal rates, and contribute to the unnatural pooling of blood in their lower extremities.

The most successful drivers today are “fanatical about their physical training, ” Carlson said, explaining that strength training is necessary for an individual’s muscles to combat the extreme G loads, and cardiovascular fitness is key in keeping a manageable heart rate (and by extension, blood circulation) against the odds.

Carlson has traveled the world in recent years explaining her research, including a stop at the Annual NASCAR Summit, at which team, venue and industry leaders gather each year to talk about their sport.

“People in the sport are excited, like at the NASCAR summit, ” she said. “I think they were excited that there is data saying, ‘Yes, these are athletes.’ They see it every weekend, but now they have data that says motor sports stars are athletes.”

Still unconvinced? Carlson’s planning to pile on. She’s now working with Beech Ridge Motor Speedway in Scarborough on plans to research the fluid balance and hydration levels of stock car drivers, for an even more complete look at what their bodies go through on the track.