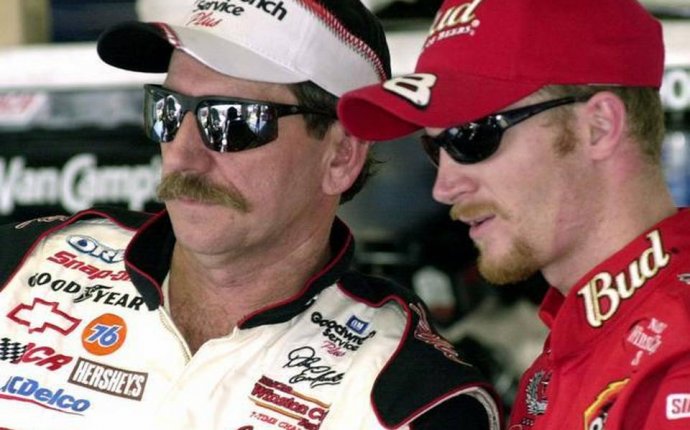 Race car driver Dale Earnhardt won a record-tying seven NASCAR championships. He died after crashing during the final lap of the Daytona 500 in 2001.

Born in 1951 in North Carolina, Dale Earnhardt followed his father into the world of professional car racing. After garnering NASCAR's Rookie of the Year honors in 1979, he followed by winning the Winston Cup championship in his second season. In total, Earnhardt — known as the "Intimidator" for his aggressive style — won a record-tying seven points championships and became the first driver to top $30 million in career earnings. He won the Daytona 500 for the first time in 1998, but was killed when he crashed at the end of the race in 2001.

NASCAR racer Ralph Dale Earnhardt was born on April 29, 1951, in Kannapolis, North Carolina. His father, Ralph Earnhardt, was a successful race car driver and renowned mechanic, and Dale developed a love for cars at an early age. After dropping out of school in the ninth grade, he went through several jobs while attempting to get his own racing career off the ground.

In 1973, Ralph Earnhardt died of a heart attack. Two years later, in May 1975, his son made his own stock car racing debut, finishing 22nd in the World 600 at Charlotte Motor Speedway.

Earnhardt eventually caught the attention of Rod Osterlund, a racing sponsor based in California, and the driver was signed to his first full-time Winston Cup contract for the 1979 season. That year, Earnhardt racked up his first win on the National Association for Stock Car Auto Racing (NASCAR) circuit at the Southeastern 500 in Bristol, Tennessee. By the end of the racing season, he had become the first driver to win over $200, 000 in his rookie year; he was rewarded with NASCAR's prestigious Rookie of the Year honors.

Continuing Success on the Track

Not long after Osterlund sold his team to J.D. Stacy in 1981, Earnhardt signed to race for driver-turned-owner Richard Childress. He spent the next two years with Bud Moore's team, but he reunited with Childress after the 1983 season and his career took off. After winning four races in 1985, Earnhardt recorded five wins and a second Winston Cup championship in 1986. The next year saw Earnhardt's best results yet, as he won 11 races and a third championship, finishing in the Top 5 in 21 out of 29 races.

Despite his undeniable success, Earnhardt earned a reputation early on for recklessness. Nickamed "Ironhead" and the "Intimidator, " he was prone to aggressively bumping other drivers out of the way in order to take the lead in a particularly close race. After a warning from the president of NASCAR in 1987, Earnhardt cleaned up his act and began developing better relationships with other drivers on the circuit.

His success on the track continued, as he won his fourth Winston Cup championship in 1990, earning a then-record $3, 083, 056 in winnings. In 1991, he took home yet another title. The streak was broken in 1992, when he finished a disappointing 12th in the standings, but Earnhardt bounced back the following year to win a sixth championship.

With a win at the AC Delco 500 in his home state of North Carolina in 1994, Earnhardt claimed his seventh Winston Cup championship, tying the legendary Richard Petty for most career titles. For the third time in five years, he topped the $3 million mark in earnings, and was indisputably the king of stock car racing.

The records kept on falling for Earnhardt throughout the 1990s, although he failed to win another points championship. In 1996, he became the third driver to start 500 consecutive Winston Cup races. The following year, he broke $30 million in career earnings, the most ever for a race car driver.

The only major victory that had eluded Earnhardt up until that point was the crown jewel of stock car racing, the Daytona 500, held in Daytona, Florida. He had come close several times, his bid for victory often derailed by mechanical failure, crashes or some other bad luck.

RT @jpeebles: My prev. Favorite: Dale Earnhardt Jr. Finishes a race in another driver's wrecked car. "How did it drive?" "Like it was wrec…

RT @Tiffany530811: @nationwide88 Yeah! Dale Earnhardt Jr is the greatest NASCAR driver ever! The greatest race car ever is #88! Go get em D…