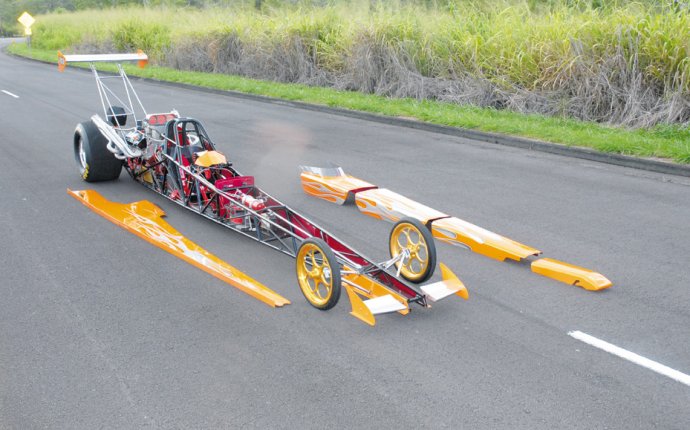 Now More Than Ever, There's A Front-Engined Dragster In Your Future

There are lots of ways to hurtle your body down a dragstrip, but few are as terrifying, exhilarating, and soul satisfying as with a front-engined dragster. Talk to enough slingshot pilots-from the 2, 500-plus-horsepower nostalgia Top Fuel boys to weekend bracket racers running 400hp carb’d small-block econo rails-and they’ll all say that you can keep your wheelstanding nitrous door-slammers, buzzing sport compacts, and even blur-fast superbikes. The real deal is sitting inches away from the flywheel of a screaming V-8 feeding its torque to an axlehousing situated directly between your legs, with only a thinly padded tin seat separating your ass from the asphalt at anywhere from 150 to 250 mph. That’s drag racing!

Good news for you is that despite a period of relative absence from the drag racing scene, slingshots are back with a vengeance, and you can play too! Thanks to numerous chassis shops and cooperative sanctioning bodies, it hasn’t been as easy to own and operate a front engine dragster (FED) since the ’60s.

Born over half a century ago, slingshots get their name from the extreme rearward positioning of the driver’s torso behind the axle and slicks. It’s a trick that helps maximize static and dynamic weight distribution. So is shoving the hefty motor as far rearward as it will go without crunching the driver. The objective is to get the greatest percentage of vehicle mass on the slicks for maximum forward thrust. But to curb wheelies, the wheelbase is stretched to as much as twice that of a typical passenger car.

Thanks to leverage, a few pounds of ballast clamped to the front axle are all it takes to get the front tires back on the ground after the initial launch. This allows them to steer again so the driver can guide the car down the track-never a bad idea.

So what happened to tarnish the slingshot’s star? One horrific event on the afternoon of March 8, 1970, was perhaps the last straw. It was the final round of competition at the AHRA Top Fuel Final at Lions Drag Strip with Don Garlits facing Richard Tharp in the Creitz-Donovan Fueler. When Garlits nailed the throttle, the starting line became a blast zone, filled with white hot shrapnel ejected from the failed experimental two-speed transmission bolted to the Swamp Rat’s blown Hemi. In the blink of an eye, Garlits’ car was sawed in half. So was the legendary driver’s right foot.

Though Big Daddy’s injuries were not life threatening, the accident served as the final wake-up call regarding the dangers posed by front-engined diggers. Prior to Garlits’ mishap, scores of others were not as fortunate and many lives were cut short or permanently degraded by the burns, contusions, and blunt trauma one can expect when a nitro-guzzling mill explodes at 200-plus miles per hour mere inches from flesh.

By 1971, Garlits was mended and back in action with the revolutionary rear-engined Swamp Rat XIV. Initial reaction was a mix of laughter and pity for “washed-up” Big, who, then in his mid-30s, was considered by some to be over-the-hill. But after sorting out some steering-ratio and aerodynamic gremlins, the old man proved the legitimacy of the rear-engine layout and came away with numerous wins over front-motored competitors, including a win at the prestigious ’71 NHRA Winternationals at Pomona. By 1973, the rear-engine chassis was king, but agreement was virtually unanimous that the new breed of back-motored cars lacked the beauty and grace of the cars they replaced. But sometimes that’s just the price of progress.

So why now, some 34 years after Garlits’ graphic and oh-so-public demonstration of their inherent danger, are slingshots so popular on the nostalgia drag scene? Aren’t we just asking for more bloodshed? Not really. Modern FED builders and drivers are more safety conscious than ever.

Fire protection, in the form of multilayered Nomex bodysuits, onboard fire-suppression systems, crankcase diapers to capture and contain oil before it can ignite, and blower restraints have virtually eliminated the blast-furnace effect when major mechanical malfunctions do occur.

And on the topic of mechanical failure, the days of building a Fuel (or blown gas) engine around a junkyard long-block are ancient history. Those rickety production-based motors were ticking time bombs and many a driver pushed his luck too far, wringing one last pass out of an obviously ailing motor, only to pay for the pleasure with third-degree burns. The difference in modern nostalgia competition motors is the abundant availability and use of highly evolved race-specific ingredients such as extreme-service aftermarket racing blocks, billet-steel crankshafts and caps, aircraft-quality connecting rods and pistons, and so on. The blunt fact is that a modern nostalgia race motor, regardless of fuel used, is far more able to survive the same strains that shattered production-based hardware and caused so much chaos in drag racing’s golden age. Not quite as manly, but hey. Overseeing it all are sanctioning bodies such as Goodguys Vintage Racing Association, American Racing Hot Rod Association (ARHRA), and even the NHRA (with its 410ci, iron-head Nostalgia Dragster class in Comp Eliminator), all paying particular attention to the safety and construction of each entrant.

The nostalgia drag racing sanctioning bodies also keep a handle on performance and cost by limiting tire size, fuel-system delivery capacity, blower size (where applicable), engine displacement, and ignition-system output in the top classes. Safe high-speed handling is ensured by prudent wheelbase and weight rules that prevent the construction of short-wheelbase guardrail magnets or featherweights that go airborne in the traps.

So get together with a few buddies, pool your resources, and go drag racing just like the boys who started it all did back in the ’60s. Who says history can’t repeat itself?

* “Believe it or not, you can actually tune the vehicle reaction time with the front tire pressure. This is because a flat tire takes longer to roll out of the beams. So if the driver is uncomfortably close to redlighting, or is redlighting, reduce the front tire inflation pressure from 45 to 35 psi. This will add a couple of hundredths to the reaction time and can compensate for a twitchy driver.”

* “The skinny front tires used on slingshots contain a low volume of air stored at high pressure. If your car goes over 175 mph in the traps, know that the wheels are spinning fast enough by half track to depress the valve stems and actually let air out of the tires. Because of the low volume of contained air, they can go flat by the finish line and chuck the tubes and tires when you lift the throttle. Always use metal caps on the stems to prevent this hazard.”

@Michael Thompson: Why would anyone hire Danica Patrick to drive their race car