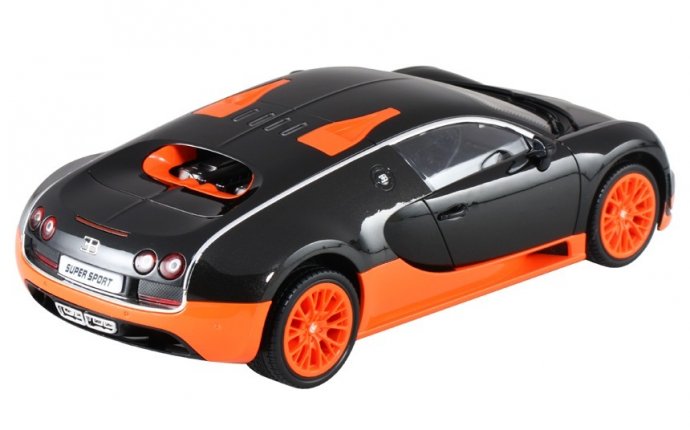 Apparently, it’s because the regular Veyron is such a pansy jellyfish of a car that Bugatti brings forth the Super Sport. The model will be the last word in Veyrons, representing the final 40 cars in a total production run of 300. Price: one hundred thousand trillion billion dollars, or it might as well be.

For the $2, 426, 904 a Super Sport costs (at the time of this printing), you could also buy 10 Ferrari 458 Italias and have $127, 654 left over for lunch. In its quest to build the ultimate stroke job for the super-rich, the Molsheim operatives don’t seem very concerned with pragmatic constraints such as fiscal prudence or, indeed, the laws of physics.

For example, the Super Sport needed more than just another 20 horsepower to separate itself from the $1.7 million rental-fleet Veyron with its piddly 1001 ponies. Why not another thou? Bugatti probably considered it. But it was decreed that a 20 percent bump in output, to 1200 horsepower and 1106 pound-feet of torque is genug. Enough. So say the Germans who run Volkswagen’s crazy-bus subsidiary, and they don’t say that very often.

Personal touches are available, such as your own initials instead of Ettore Bugatti’s etched into the gas cap. One customer paid for illuminated doorsills with “words that can’t be repeated, ” said a Bugatti staffer.

If you want the Super Sport’s body finished in clear-coated carbon fiber instead of paint, add $428, 180—just a bit more than the price of a new Rolls-Royce Phantom Coupé.

Let’s be blunt: This car is completely mental. At the Super Sport drive in the dusty hills near Jerez de la Frontera, even its chief engineer, Wolfgang Schreiber, admitted that it’s easier to find an honest hedge fund-manager than places to use 1001 horsepower, let alone 1200.

“Most of our customers drive very normal.

Actually, slow, ” said Schreiber. “So we needed changes you could see and feel at any speed.”

To get the Super Sport to its 268-mph production-car land speed world record (real production Super Sports are limited to a tire-saving 258 mph), Bugatti did a little smoothing of the Veyron’s Humpty Dumpty shape. Most noticeably, the polished aluminum bazookas on the regular Veyron’s back that sluice air to the engine are gone.

In their place is a sort of carbon-fiber turtle shell that forms a tunnel through which the driver sees what he just left far behind and which is cut with flush-fitting twin NACA ducts.

If you want to show off the engine, it takes two trained technicians about 30 minutes to remove the couple-dozen fasteners holding down the shell. Nevertheless, Schreiber says the ducts increase power by creating a greater ram-air effect than the bazookas while also offering reduced drag.